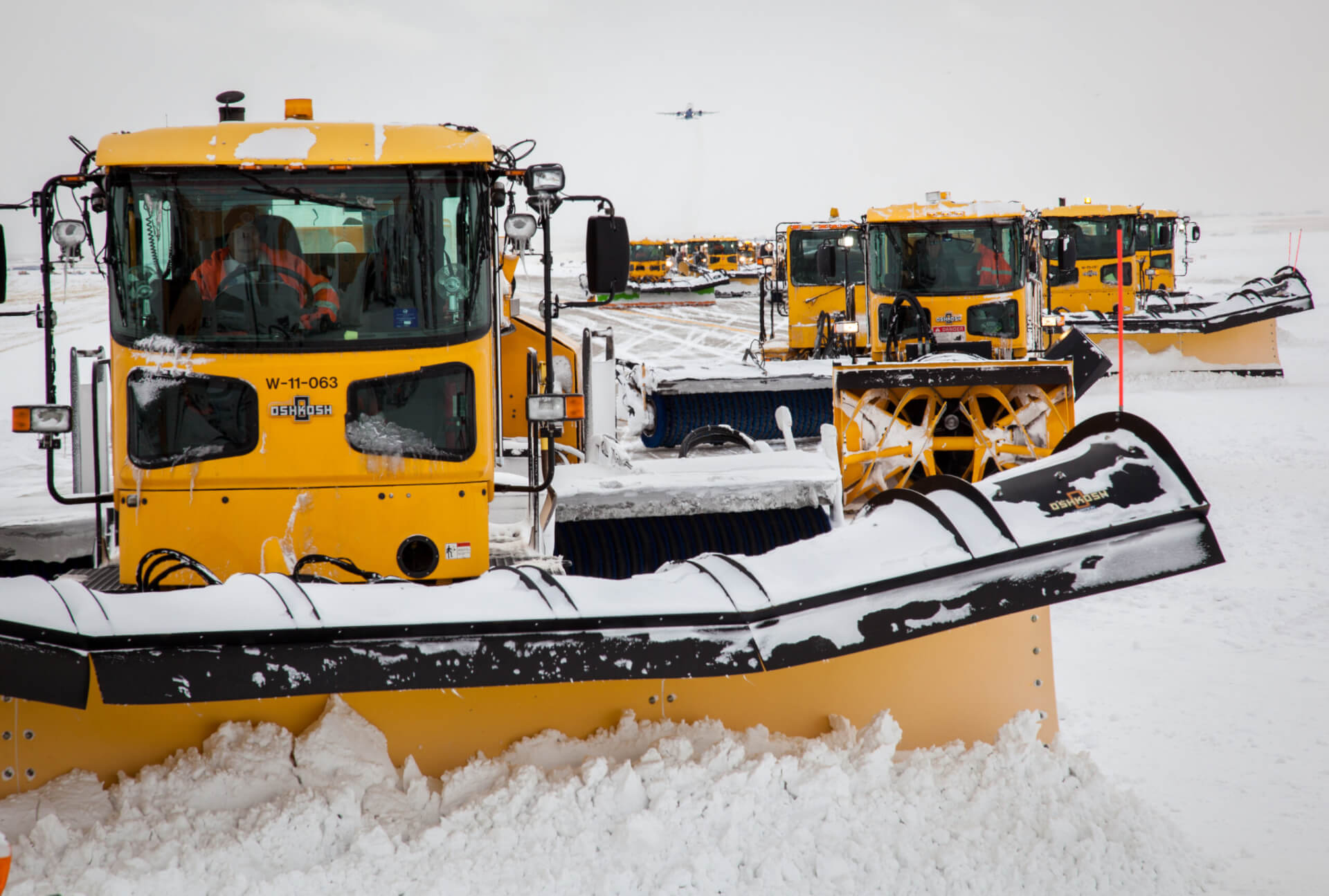 The measures implemented in response to the Covid-19 pandemic have reduced demand for air travel and altered the face of air cargo transport. But airports must still ensure they can stay open safely through the winter

Globally, the International Air Transport Association (IATA) is forecasting full-year passenger traffic in 2020 to be down by 66% compared to 2019, following “a dismal end to the summer travel season in the Northern Hemisphere”.

Nonetheless, Andreas Schwald, manager sales airport markets and sales global/airport at Switzerland-based Aebi Schmidt, points out: “Certain demands need to be fulfilled for safety in winter, even if traffic is quiet.

“On the other hand, at Leipzig airport, DHL’s hub has more to do than it did in the past because of the higher frequency of freighter aircraft.”

Indeed, the volume of cargo handled at Leipzig/Halle airport during the first eight months of 2020 increased by 6.8% to about 865,631 tonnes.

A statement from Leipzig/Halle says that more than 50 freight charter flights, including some involving An-225, An-124, B777, B747F, B787-9 and A350 aircraft have also been handled in addition to the airport’s regular cargo traffic.

With the peak air freight season imminent, that upward trend is likely to continue into the winter, keeping Leipzig/Halle’s winter services team busy despite its drastically reduced passenger throughput.

Denver International Airport, meanwhile, has seen its passenger traffic recover better than most US airports according to Emily Williams, a spokesperson for the airport operator.

In fact, flights at Denver are at 65-70% of pre-Covid levels. During peak times of the day, the volume of flights is such that all six of the gateway’s runways must be accessible – whatever the weather.

“Operationally, Covid has changed how we communicate – during pre-season training and certifications, pre-shift briefings and post-storm analysis,” Williams says. The Colorado airport’s winter operations training has moved to an online format. Plus, crews sanitise equipment prior to starting a shift, and instead of gathering together, operators report directly to the equipment and wait in their cab for instructions.

In the last five snow seasons, the airport received an average of 45.2 inches of snow each year. Last season it saw above-average snowfall at 57.6 inches. Snowfall at the gateway has been as low as 21.8 inches, while in the winter of 2015-16 it amounted to 72.8 inches.

Denver Airport has over 90 million square feet – 2,066 acres – of airside pavement that its crews may have to clear during a snow event. In addition, its landside snow crew keeps parking lots and the main road to the airport, Peña Boulevard, and other nearby roads clear so that passengers can reach the airport safely.

In order to keep up with those tasks: “We have approximately 200 pieces of airside snow removal equipment and 110 pieces of equipment for landside parking lots, hotel plaza, train platform and roadways,” Williams outlines.

Multifunctional
Elsewhere in the US, Chilton, Wisconsin-based MB Companies delivered the first MB3 High Speed Runway Brooms to Chicago O’Hare and nearby Midway airports in June this year.

Alan Luke, federal government and eastern region sales manager at MB Companies, remarks: “Since winter weather conditions in Chicago can change drastically from hour to hour, O’Hare and Midway must have the flexibility to rapidly meet the changing conditions.

“That implies a fleet of high-speed multitasking equipment and blowers for the runways, and dedicated equipment such as front-mounted brooms and ploughs for taxiways and ramp areas. Deploying only one type of machines wouldn’t work in such conditions.”

Considering how snow clearance operations have changed over the last decade, Luke says that there has been a reduction in the available workforce, which “directly impacts the airport’s ability to deploy equipment necessary to keep up with winter operations”.

Multifunctional equipment also saves time. Williams says: “Denver Airport uses multifunctional machinery that can plough, sweep and blow snow, and some spread liquid products at the same time. By using multifunctional pieces of equipment and making other improvements to snow management, the airport has reduced the average amount of time needed to clear a runway from 45 minutes to under 15 minutes.”

There is now a significant presence of multifunctional equipment at various airports. Not only does such equipment improve efficiency, but it also enhances safety: the presence of fewer vehicles on the airfield reduces the risk of accidents.

Denver owns the equipment that is used on its runways and taxiways. It has a contract with Aero Snow Removal Services for eight snow melters and 59 loaders for snow removal on the ramp areas. Given the amount of snow the airport receives each year, owning the equipment is the most cost-effective option, Williams points out.

Denver also uses sensors installed in the pavement of some of its runways to help determine the freeze point of liquid on the runway, which improves the planning of surface treatment.

Snow melting – a trend at various airports – forms part of Denver Airport’s programme too. “We push snow to strategic locations where we have installed drains. This allows us to melt the snow and prevents the team from having to haul it out, which is time consuming,” Williams notes.

Currently, the airport is focused on a fleet capital replacement programme, she goes on. “We are committed to replace our equipment at the correct life cycle, so that the snow removal fleet remains in top operating condition. Over the next few years, Denver Airport is funding replacement of its airfield multifunction equipment. This applies to 65 critical snow removal assets.”

Advancing automation
Over the years, Denver has implemented a number of innovative processes to improve its snow programme based on the experiences of each snow season. “For example, as a result of a major blizzard in 2006 that dropped more than 20 inches of snow, the airport added a ‘snowman’ position in the FAA control tower, to orchestrate runway closures with snow crew movement,” Williams recalls.

“This position has streamlined the communication between the snow removal team and the Federal Aviation Administration [FAA] and has bolstered the relationship and level of trust between airport operations and the FAA.”

Back in Europe, Aebi Schmidt is looking to the future, too. The manufacturer has been using this year’s unusually quiet summer season to take its products to the next level. Schwald explains: “Our customers are looking for three major topics: efficiency, safety and sustainability. That’s why we have started a development project to move step by step towards a driver-assisted, then automated, and finally an autonomous jet sweeper fleet.

“Customer requirements are on different levels,” he continues. “Some like to have assistance for the driver with an extra screen to help guide the driver with the interaction of the machine. This is step one, which is already realised.

“The next step is to automate all the movements of the truck, plough, brush and blower according to the route information that is programmed in.

“If snow clearance equipment is automated, it is possible to reduce the down-time on the runway,” Schwald notes. “Due to the pandemic cost efficiency is becoming more and more important and we are convinced that automation and digitalisation will be the way of the future.”

Another aspect of digitalisation at Aebi Schmidt is the company’s IntelliOPS platform, whereby an airport can track vehicles during operations. IntelliOPS will also work to monitor the movements of Aebi Schmidt’s automated jet sweepers and other clearing vehicles in the future.

Denver Airport is also considering pilot projects for autonomous vehicles that could be used. Currently: “We are monitoring the autonomous work that is being performed with the Snowbot in Finland,” Williams confirms. The Runway Snowbot project brings together Finnish airport operator Finavia, tractor manufacturer Valtra, renewable fuel producer Neste, Nokian Tyres and Vammas snow ploughs.

The idea behind the project was to “programme the optimised runway clearing patterns to a special unmanned, autonomous tractor running on low-carbon biofuel, pulling an effective snow clearing equipment and ensuring its driving properties with top-notch tires”, according to the Snowbot partners.

The initial experiment was carried out successfully at Ivalo Airport in Finnish Lapland during the 2018-19 winter season.

“The Runway Snowbot gives a glimpse of what the future will bring for airport snow clearing, and it paves the way for new ways of thinking,” Finavia adds.