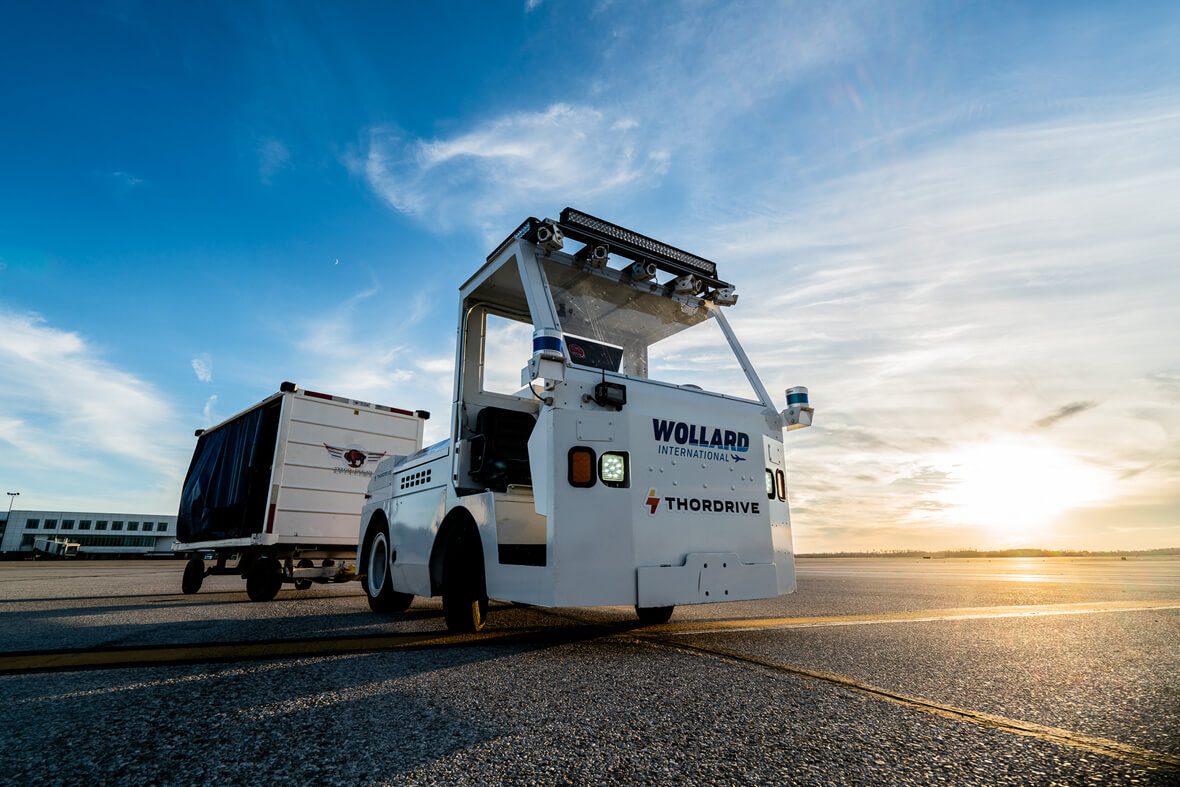 Now based in Cincinnati, ThorDrive was founded in South Korea by a Seoul National University chairman in 2016 as a specialist in robotics and artificial intelligence. Its autonomous driving technology is said to be built on more than 15 years of development by software engineers and robotics specialists, with the systems used in its autonomous baggage tractor trialled at Cincinnati/Northern Kentucky Airport based on software that has been operationally tested for three years over more than 80,000 miles of driving.

In 2016, ThorDrive was involved in a robotic cab project in downtown Seoul and in 2018 it established a presence in Silicon Valley in California, gaining some success in last-mile delivery systems.

ThorDrive specialises in using its proven technology to support markets where efficiencies can be quickly realised, including – but not limited to – passenger vehicles and commercial trucks. Thus, while its technology has been successfully deployed into passenger cars, delivery vans and small electric utility trucks, industry, logistics and the aviation industry are also now prominent in its thinking.

The collaboration with Cincinnati/Northern Kentucky International Airport dates back to February 2020. According to ThorDrive vice president – business development Eddie Shelton, Cincinnati/Northern Kentucky is extremely innovative in its thinking, with autonomous baggage tractors and shuttles considered to be potentially important elements of future airside operations there. The airport operator has also looked into the possible use of various robotic technologies landside.
Installed in a Wollard International M40 diesel tractor, the ThorDrive autonomous driving technology uses both cameras and light detection and ranging (LIDAR) to scan its operating environment. This is compared to the picture of its environment that the unit has scanned into its memory – the result of pre-mapping of the location undertaken by the ThorDrive team and scanned into the unit’s software – to enable it to pinpoint its location, navigate and identify possible hazards.

While GPS also helps the unit to precisely identify its location, unlike some of its autonomous technology peers because it ‘identifies’ and ‘recognises’ the surroundings picked by up the cameras and LIDAR (in the future the system will probably call upon radar as part of the process of building up a 3D picture of its environment), the unit does not rely completely on GPS for determining its position. That is something that might be vital if the GPS feed ever goes down, for example, Shelton points out.

When Shelton spoke to Airside in April, after more than a year of airside testing the trials at Cincinnati/Northern Kentucky International Airport were still ongoing. Although, he says, “we’re about 90-95% of the way there now, with just a little bit of tweaking to do, the process of testing and developing never really ends”.

This is because, while an airport ramp is a very controlled environment, unexpected situations do occur and the autonomous software can always be further improved with programmed responses to such eventualities, he suggests.

Moreover, because of the potential for constant improvement, ThorDrive will always be there post-sale for any customer who requires assistance, Shelton confirms. And that day might not be too far away – ThorDrive is hopeful of entering into commercial sales in the fourth quarter of this year.

The biggest issue in the testing at Cincinnati/Northern Kentucky International Airport actually turned out to be ensuring that the system could always identify an aircraft, as well as other GSE, wing walkers, other handlers and all the other entities that can be found on an apron. ThorDrive had plenty of experience of autonomous driving, but the airside environment was new to it and lessons had to be learned.

Mating the old-style analogue technology of GSE equipment with the digital technology of today required by sophisticated autonomous driving technology was also a challenge.

Avoiding collisions is of course critical in terms of safety. It is also important in terms of avoiding the financial impact of damage to equipment and especially to aircraft – and, Shelton notes, the value of autonomous airside operations lies not only in cost savings through efficiencies and labour-saving but also through avoiding the GSE/GSE and GSE/aircraft collisions that are an unwelcome feature of today’s ramp operations.

Gathering interest
While ThorDrive has only recently begun marketing the airside applications of its autonomous driving technology, interest has been keen, Shelton says. With an ambitious expectation of commercial launch before the end of the year, ThorDrive is already talking to several ground service providers and cargo companies about the technology (various industrial and warehouse logistics-based applications are also being promoted for the software).

While Cincinnati/Northern Kentucky International Airport would not be a potential customer – because it does not actually operate GSE – it has proved vital as a partner (as has Wollard, Shelton notes) and can “open doors” for ThorDrive as it seeks potential customers.

Moreover, while the current tests have involved the M40 diesel tractor, ThorDrive is also looking to begin project developments that might involve a battery-powered variant of the M40 or a more cargo-focused tractor.