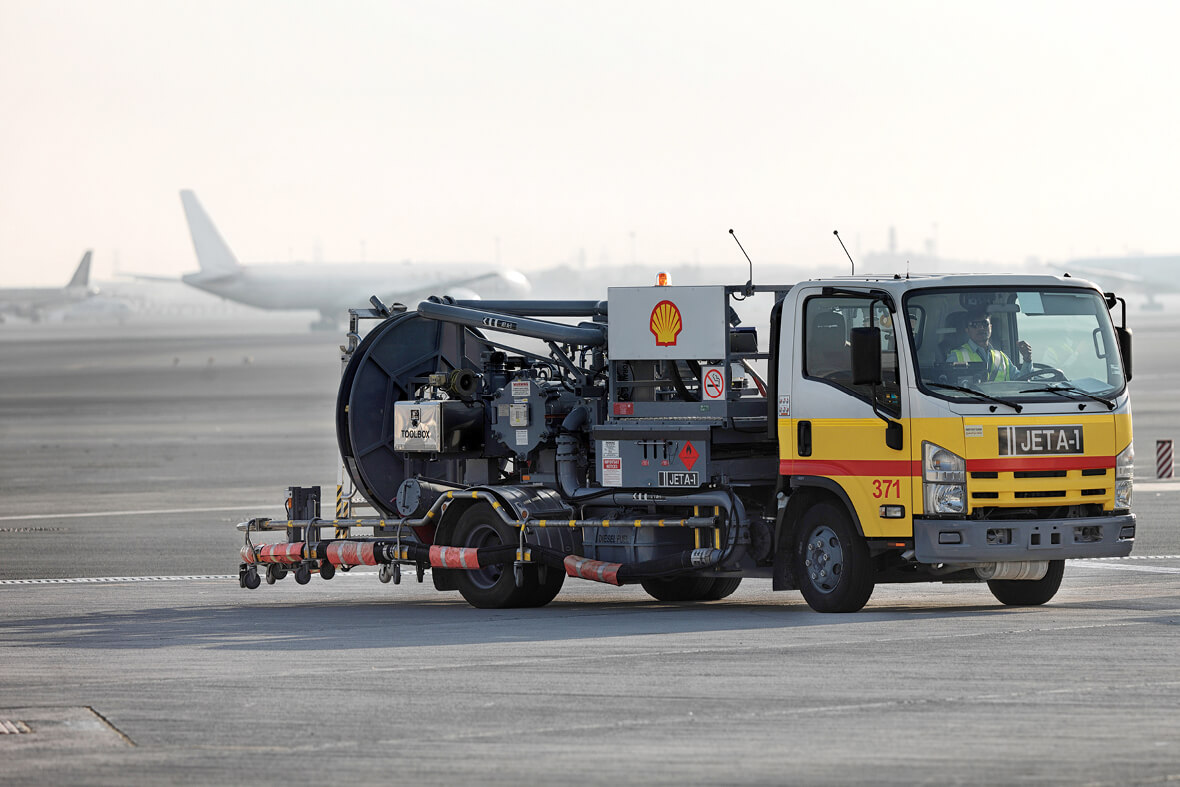 Digitalisation is an inescapable trend across many industries, and aircraft refuelling is no exception. More and more digital tools are becoming available, besides other changes aimed at improving the process. Megan Ramsay reports

One area that is benefiting from digital developments is aviation fuel contamination testing.

In response to industry requests to improve the efficiency of microbial fuel testing, biosciences company Conidia has launched an upgraded digital verification tool. FUELSTAT® Result is a mobile app that allows operators to complete compliance testing on site, without paper and without the need to register.

The free, iPhone and Android downloadable app works alongside Conidia’s FUELSTAT® test kit, which has been on the market for 20 years.

Owen Busch, senior vice president – sales and business development at Conidia, says the kit has undergone extensive development over that time as fuels have continued to evolve.

“All fuels – not just jet fuel – change all the time because the regulations that govern them change. We actively test all types of fuel, including sustainable aviation fuels, to see how they respond to contamination so that we can make sure our product is fit for purpose.”

Conidia’s goal, Busch says, is to streamline a process that can be cumbersome, by taking steps and time out of fuel contamination testing – without, of course, sacrificing accuracy.

The original FUELSTAT® app was launched in 2017. Since then, a constant cycle of feedback between Conidia’s team and customers has culminated in the latest major update of the app, which Busch describes as providing “the best user experience yet”.
The FUELSTAT® test kit with the free Result app enables the operator to take a sample, run a test, and get the results in less than 15 minutes. Users can instantly create a report that they can print or email from their phone or tablet straight away – rather than waiting hours or even days for laboratory results and reports.

FUELSTAT® thus detects contamination early, and makes immediate intervention, such as the addition of a biocide, possible.

Airport operators, ground handling agents and fuel handling companies have all brought their own experience in the field to the design of FUELSTAT® Result. One new, customer-driven capability that the FUELSTAT® Result app offers is a threshold indicator that helps support proactive, preventative fuel maintenance.

Busch explains: “A test may detect negligible amounts of contamination, but those quantities could still be close to a moderate amount. So, rather than simply a distinct green, amber, red traffic light system, indicating negligible, moderate and heavy contamination, FUELSTAT® Result now has caution alerts which indicate that contamination levels are approaching the next level and may require action soon.

“Timely information such as this helps our customers to make well-informed decisions to support their operations. With the threshold caution indicator, they can choose to act early – or not, depending on their schedule and other variables.”

Such agility is vital in an industry that involves huge investments in operational assets that must be up and running to justify their expense.

Busch sums up: “Our task is to ensure business continuity and asset reliability for our customers. When an airline has an AOG [aircraft on ground] event, time is money. In extreme cases, microbial contamination can cause problems with engine performance and filters, for example. Therefore a robust, preventative fuel maintenance process is essential.”

FUELSTAT® Result is “not a static product”, he points out. The product will continue to evolve as Conidia works to keep pace with the market’s changing requirements and priorities.

Regarding the acceptance of digitalisation, Busch observes that there is always a dichotomy around the availability of digital data, in any industry. “Some customers in every industry want to digitalise everything and gain real-time data and insights,” he says. “Others are more sensitive, perhaps because they have security concerns or their IT maturity isn’t quite where it needs to be.

“FUELSTAT® Result now caters for both groups: it has high standards for data security, and customers don’t have to register in order to get the full benefits of the app – they can use it anonymously.”

Preventing misfuelling
Aviation fuel suppliers are also offering digital tools for their customers. One example is Air bp’s Airfield Automation, which is designed to enhance safety, reliability and compliance in airport fuelling operations.

Valerio Ferro, vice president, aviation customers at Air bp, points out: “Misfuelling overwing-fuelled aircraft is one of the biggest risks our industry is faced with. Air bp’s Airfield Automation safe2go app is a pioneering application that provides additional fuel grade checks, including an engineering barrier to automatically check aircraft fuel grade decals, which greatly reduces the risk of human errors that can result in misfuelling a plane.”

The safe2go app consolidates the data related to airport fuelling operations and inputs via an app on a handheld device in the fuelling vehicle. It has been deployed at over 139 locations – and this number is increasing.

The safe2go app works by capturing fuel volume readings and provides fuel grade checks to add an extra misfuelling barrier. The app also electronically captures customer details, fuel volume readings, tax and charge details, which are confirmed with an electronic signature from the pilot or airline representative on a tablet computer. By using this automated, end-to-end, paperless system, accuracy is enhanced, and any potential mis-keying errors are minimised.

The initial Airfield Automation service launched in 2020 was a transaction data service, Ferro says. He explains: “It was a first step in supporting our customers in the digital transformation. The data service enables airlines to receive fuel ticket data electronically.

“Air bp has been working with industry stakeholders to deliver an operational data service: enabling real-time two-way communications from receiving an airline’s preliminary fuel order through to a revised final order, concluding with a fuel summary and remote digital acknowledgement of fuel received by the airline.

“The use of the International Air Transport Association (IATA) fuel operational messages standard provides for efficient and cost-effective implementation.”

The key benefits for Air bp’s customers include significant operational efficiencies both at the airport and in their back-office processes, which may contribute to a greater likelihood of on-time departure, optimisation of fuel load and administrative savings.

“Air bp aims to work with its stakeholders to radically transform the fuelling process for customers, allowing much faster aircraft turnaround with optimum fuel load, reducing delays and improving profitability for each flight,” Ferro adds.

Operators have reported increased speed, accuracy and efficiency and Airfield Automation received the Excellence in Application Modernisation Award, the Product Innovation Award and was declared the Overall Winner at the 2020 UK Real IT Awards.

According to Ferro: “Since launching in May 2018, one million fuellings have been processed using Airfield Automation technology. Air bp should soon be celebrating the installation of the technology at 300 network locations across 27 countries and four continents.”

Contactless compatibility
Thomas de Boer, head of operations at Shell Aviation says: “With the aviation industry operating on finely balanced operating margins, our customers are constantly challenged to maximise efficiency and look for innovations that could help improve turnaround times. Incorporating digital technologies into the refuelling process is an area where we believe there is huge potential for uncovering greater operational efficiencies.”

According to de Boer, there is a clear trend towards collaborative technology development in aviation. For example, different airlines have different cockpit apps, which often makes transmitting data from system to system challenging and the integration of new technology very complex.

“In addition, as our Shell SkyPad technology is already in operation at airports across our global refuelling network, we are able to instantly connect to airlines’ systems at any of the participating airports based on a single integration. This means we can offer a simple, paperless solution to our customers with no additional admin required per location.”
From an airline perspective, “The currency of refuelling is seconds”, de Boer observes. Therefore, minimising delays in aircraft turnaround times is one of the most critical aspects of maintaining profitability and delivering the level of service demanded by passengers in today’s busy world.

“That’s why we made a huge step towards Shell Aviation’s vision of fully digitised operations by introducing Shell SkyPad, connecting our operators who provide the fuel on the apron with office staff and customers throughout the refuelling process,” de Boer says.

“The complete and fully integrated solution links the tablet to a cloud-based computer platform, simplifying and speeding up critical aspects of the process, as well as reducing administration and human error.”

The real-time communication Shell SkyPad Data Exchange now offered reduces the time aircraft spend on stand. From the initial fuel order from the pilot to take-off, the exchange between Shell SkyPad and an airline’s own system allows potential issues during critical moments of the refuelling process to be predicted and averted. Airlines integrating Shell SkyPad Data Exchange can save up to 13 minutes during the refuelling process, which can cut delays in turnaround time and associated costs.

The first airline to implement Shell SkyPad Data Exchange (in August 2020) was Lufthansa, which – along with software specialist SAP – was involved in the development of the solution.

More recently, Cathay Pacific has been working with Shell Aviation at Singapore Changi Airport to integrate the airline’s internally built application Flight Folder, which has all the information that a crew needs for a particular flight, with Shell SkyPad Data Exchange.

The two systems communicate directly with each other, sharing information and creating a real-time link between the pilot and the refueller.

Clearly, the industry is continuing to invest in the future, despite lingering uncertainty over just what form that future will take. Ferro believes that in the post-Covid world, aviation will need to adapt to a new operating environment, with tight budgets and fewer staff – and without compromising on safety – and that includes refuelling.

“To recover quickly, businesses will have to re-design existing processes as they are forced to do the same with fewer people,” he says. “Digitalisation and process automation will play a vital role, especially if existing affordable technology can be used.”