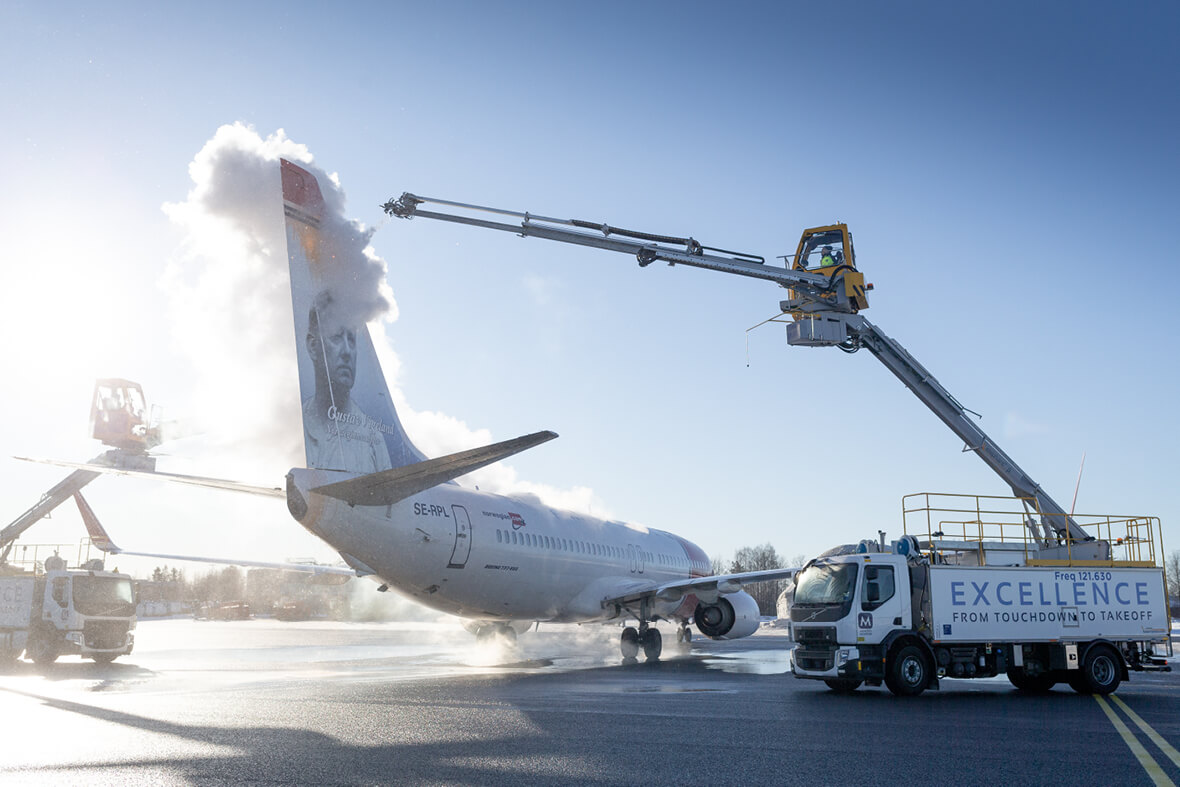 The environmentally friendly Elephant e-BETA aircraft de-icer from Vestergaard underwent tests at a number of airports across Europe and North America over the course of the last 2020-21 Northern Hemisphere winter, and is now available to the market

According to the Roskilde, Denmark-based supplier of de-icing, aircraft washing and toilet and water servicing units, the e-BETA offers users the potential to reduce greenhouse gases, including carbon dioxide and nitrogen oxides, by 87% per truck every year.

One of the trial programmes saw Menzies Aviation, a longstanding Vestergaard customer, test out the e-BETA at Oslo Airport. Menzies operates 11 Vestergaard rigs as part of its de-icing fleet at the Norwegian gateway, where in a typical (non-Covid-affected) year it handles some 5,000 or so turnarounds over a typical season between the months of September and May.

Vestergaard is hoping to produce a fully sustainable version of its product line for performing carbon neutral ground handling operations by 2030 and, it says, “The electrically operated Vestergaard Elephant e-BETA is a critical part of this journey, reducing environmental footprint by significantly reducing greenhouse gas emissions.”

Ole Petter Storstad, director of airport services for Norwegian state-owned airport operator Avinor, observes: “Avinor has a goal that its own operations at Oslo Airport will be fossil free by 2030. We are therefore pleased that our partners are working in the same direction and have a green focus when they further develop their services.”

Lars Barsoe, vice president sales and marketing at Vestergaard, says that as one of the busiest de-icing hubs in Europe, “The choice of Oslo was an obvious one, as there would be great opportunities to test the unit in action.”

Feedback from Menzies in Oslo [regarding this winter’s trials] has been positive, he says. “We are very happy with the feedback we have received. From January to April this year the unit has been used for de-icing operations in Oslo alongside Menzies’ regular Elephant BETA units and has performed with the same efficiency and reliability as our customer is used to from our other equipment.”

According to Barsoe, the battery capacity of the e-BETA has lived up to expectations and over the course of the test period, the built-in diesel ‘range extender’ has been required only to a very limited extent, while “the customer reports that ‘We have not had to refill the diesel tank a single time’,” he confirms.

Trials have not been restricted to Oslo and to Menzies. Other tests of the e-BETA held during the 2020-21 winter season put the de-icer through its paces at airports including Stuttgart, Munich and Frankfurt in Germany, Paris in France and Montreal in Canada.

Ongoing improvement
“At Vestergaard Company, we pride ourselves on continuous development of our products,” Barsoe informs. “This includes the Elephant e-BETA and our other new, sustainable products. After successful customer tests, the first version of the e-BETA is now launched as a commercial vehicle and will be a part of our de-icer portfolio for the coming 2021-22 season.”

The potential market for the new unit is large, he believes. “All winter operation markets focusing on sustainable ground handling operations are markets for the Elephant e-BETA,” Barsoe suggests. “We hear from our customers that sustainability is a key area for development of airports in many regions – in North America, Asia, the Middle East and Europe.

Vestergaard currently offers sustainable versions of the e-BETA (the company’s largest de-icer), a new glycol recovery vehicle and a small electric towable water and toilet service unit as well as fully electrical full-size toilet and water service units – both winterised and non-winterised. And, “With a forthcoming electric version of all our products we will be able to meet the demand for sustainable ground handling products from GSE customers in all regions,” Barsoe notes.

“We believe that sustainable solutions will overtake conventional fossil solutions in the near future. We can see that there is a lot of political pressure on the entire sector to move towards greener solutions. We aim to be part of that solution,” he concludes.