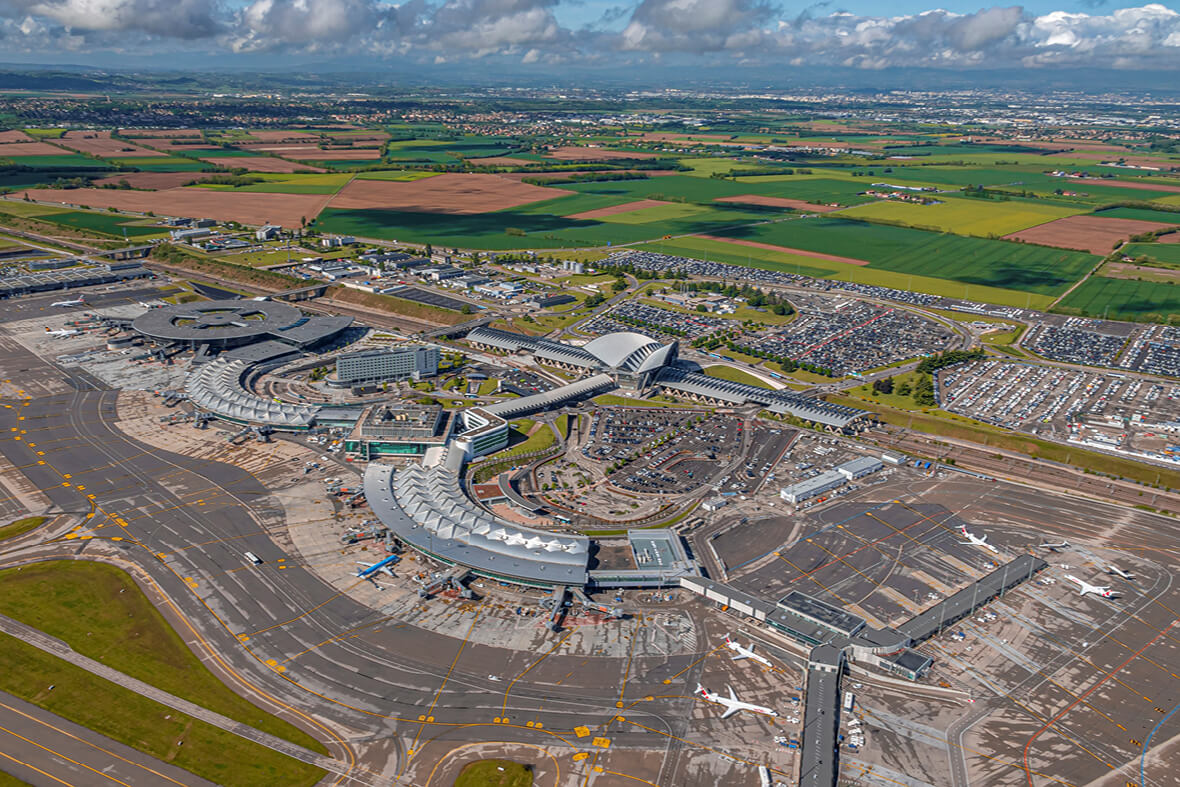 VINCI Airports – operator of 45 airports across Europe, Asia and the Americas – has partnered with Airbus and Air Liquide to promote the use of hydrogen as a way to lower harmful emissions in the aviation sector. One of its gateways, Lyon-Saint Exupéry in France, will act as a launch location, with the first installation of hydrogen power infrastructure to take place in 2023

2023 is expected to see the opening of a ‘green’ hydrogen gas distribution station at Lyon-Saint Exupéry. This station will come to supply on-airport vehicles including airside buses, trucks and various GSE handling equipment, as well as heavy goods vehicles that operate around the airport, in addition to aircraft.
This first phase is said to be “essential to test the airport’s facilities and dynamics as a ‘hydrogen hub’ for the region”.
Between 2023 and 2030 liquid hydrogen infrastructure will be made available to supply aircraft and then, beyond 2030, the deployment of appropriate hydrogen infrastructure will enable the “mass distribution” of liquid hydrogen at the airport.
Also by 2030, the three partners are expected to have studied the possibility of equipping other gateways across VINCI Airports’ widespread European airport network with the infrastructure and facilities necessary for hydrogen production, storage and supply for both ground vehicles and aircraft.
According to a joint statement, the three-way partnership is expected to benefit from the know-how of Airbus in terms of commercial aircraft, from Air Liquide’s expertise in mastering the hydrogen value chain (production, liquefaction, storage and distribution) and from the global reach of VINCI Airports, which will offer the airport network.

Green hydrogen
According to Eric Delobel, chief technical officer at VINCI Airports, it is important to distinguish between green hydrogen and grey hydrogen, as they do not have the same environmental benefits for aircraft or ground-based vehicles. “On our network, gas and liquid hydrogen will be produced from sustainable energies, such as solar plants installed on our airports, thus enabling fully decarbonised flights.”
He continues: “Hydrogen as a power source will have advantages but we insist that only a multi-pronged approach can set the industry on its climate sustainability pathway. Hydrogen is one of several solutions – such as sustainable aviation fuel (SAF), APU [auxiliary power unit] off, etc – and VINCI Airports will uphold the industry’s efforts to make them a reality.”
Nevertheless, Delobel expects hydrogen to be key to a more sustainable aviation industry. “Air transport industry leaders have a common vision of the challenges involved in achieving carbon neutrality by 2050 for Europe and 2060 for the world.
“The use of hydrogen is one the solutions but given the technological challenges inherent to the development of such a technology, it was necessary to join forces with the major players in aviation and hydrogen to meet these challenges.
“This collaboration will grow in the long term, given the magnitude of the technological, economic and regulatory challenges ahead of us.”
Lyon-Saint Exupéry was chosen to act as the pioneer site not least because, as one of VINCI Airports’ Innovation Centers of Excellence, it serves as an “exemplary part of VINCI Airports’ environmental strategy”, says Delobel.
The airport achieved carbon neutrality through offsetting in 2017 (gaining ACA3+ certification) and thanks to numerous changes made there, including: full re-lamping of parking and runway areas with LED technology; the construction of Terminal 1 according to high environmental quality standards; the installation of two new boiler rooms and a complete renovation of the gateway’s heating network; and the launch this year of the first airport carbon sink.
“Building on this positive momentum and thanks to the support of regional authorities, we have set ambitious goals for this airport, which will be the first commercial aviation airport in France to reach net zero emissions of greenhouse gases by 2026 within the scope of its business.”

Hydrogen hub
The hydrogen facilities to be based at Lyon-Saint Exupéry will not benefit the airport alone. “Lyon is also a key intermodal node in the region, which will represent significant demand and create opportunities for the distribution of green gaseous and liquid hydrogen.”
By becoming a hydrogen ‘hub’, Lyon-Saint Exupéry Airport’s green hydrogen production will be able to respond to an array of different needs within or outside the airport. “Airports are natural economic and mobility hubs and Lyon’s influence spreads across the Auvergne Rhône-Alpes region, which also has an ambitious hydrogen programme related to its Zero Emission Valley project and with which we are collaborating closely,” Delobel observes.
“Consequently, we are able to leverage this position to reach economies of scale that will help extend the use of hydrogen and decarbonise numerous activities.”
Scaling is also key to understanding the dynamics of liquid hydrogen management, Delobel believes: he says hydrogen will be used for future aircraft in large quantities on a daily basis.

Hydrogen for GSE
There are no hydrogen-powered GSE vehicles in use at Lyon at present. However, says Delobel: “We are working closely, under the aegis of our partnership, with several players in the GSE environment to properly determine hydrogen switch or retrofit opportunities.
“Although estimates are still being determined, we are confident that bringing all players to the table and pushing hydrogen wherever it most makes sense is the right approach to ensure that the aviation industry is prepared for the upcoming hydrogen revolution.”
Whether it be for GSE or for road vehicles or aircraft, Delobel is of the opinion that hydrogen will be “undoubtedly one of the major solutions to reduce our carbon footprint and decarbonise the mobility sector.
“For our airports, the road to zero emissions will require the use of hydrogen and also sustainable aviation fuels. Concerning the latter, VINCI Airports distinguished itself by delivering for the first time sustainable aviation fuel (SAF) produced from cooking oils at Clermont-Ferrand airport in April 2020.
“Although it is early to provide figures regarding the future amounts of hydrogen for aircraft, we base our estimates on the types of aircraft, routes and traffic. Sharing knowledge through our partnership with Airbus is very valuable in this regard.”