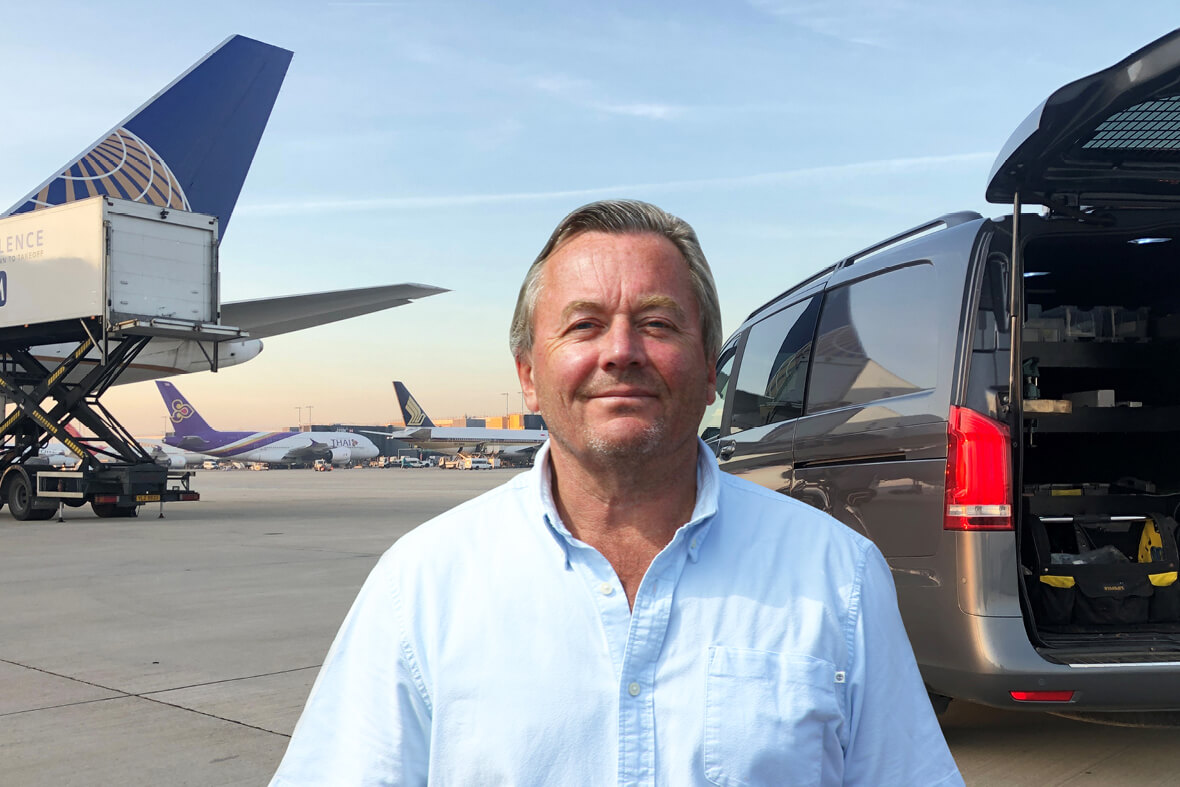 XOPS – X OPerations on Screen – is an integrated platform that delivers real-time data that can be used to track, monitor, schedule and manage motorised and non-motorised GSE to optimise their value and ensure the quickest possible aircraft turnarounds

XOPS combines an advanced telematics system with operations management software and a data processing engine that allows aircraft turnaround operations to be monitored and managed in a single, integrated digital environment. It is applicable for the full range of ground handling operations, including fuelling, catering, and baggage and cargo handling.
As well as enabling optimal use of scarce GSE resources, the system also removes many of the monitoring and decision-making responsibilities from dispatchers and other managers by automating scheduling and instantly flagging up any problems that arise.
XOPS is the brand name of the digital, ‘smart’ fleet and operations management system offered by Resonate MP4. Resonate MP4 was established in France as a specialist in digital processing, multimedia systems and ‘intelligent transportation’ by two brothers, Frédéric and Jean-François Bouilhaguet, the former the technical specialist, the latter bringing many years of experience in airport and airline operations, particularly with Air France.
These two founders were quickly joined by Cristian Spiescu in order to establish, lead and grow the XOPS software development team in Romania.
Together, they created an application for digitising turnaround processes within the aviation industry. The result of that – XOPS – was picked up by various independent ground handlers in France; Air France, the French flag-carrier, remains the platform’s biggest user today.
Resonate MP4 really got involved in telematics about a dozen years ago, informs David Read, general manager of Resonate MP4 UK, who has worked with co-founder and current CEO Jean-François since 2015. At that time, the company for which Read worked (which offered services to Heathrow Airport’s operator and its ground handlers) was collaborating with Resonate MP4 on a tender for telematics at London Heathrow International Airport – a tender process in which they were successful and for which Resonate MP4 still holds the contract today. Shortly after that, Read moved across to work with Resonate pretty much full time.
XOPS’ raw material is the data collected by the telematics element of the system, and this data is “precise down to the metre, reliable and accurate”, says Read. It delivers ongoing data including such variables as the speed of a GSE unit, its location, the cargo it is carrying and the maintenance status of the equipment, as well as much more besides. For electric GSE, a growing proportion of the ground service vehicles now working on airport ramps, XOPS also offers detailed data on such things as battery condition, helping for example the system or manual operators to determine and optimise when the next battery charge might be required.
Sitting above the Fleet Management System (FMS) aspect of XOPS is the Operations Management System (OMS), which analyses and interrogates the raw telematics data and, working in sync with the parameters laid down by the system’s users (assisted by Resonate MP4), assesses the optimal employment of GSE assets. Thus, for example, it will schedule when and where a particular item of GSE should be picked up by an operator, to which stand it should go, what it should do when it gets there, and where it should be moved for further use or parking after that.
Performance on the ramp is assessed on an ongoing basis against that scheduling and any issues or problems are then flagged up by the XOPS platform.
Data is accessible on a real-time basis by any operator that has the necessary clearance (there is hierarchical access permission security built into XOPS that can be set up as required according to customer needs), whether that be an individual GSE ground handler operating a pushback or any other type of GSE, a dispatcher or a fleet manager; an airport authority can also analyse legacy data to assess the performance of ground service providers (GSPs).
Details of GSPs’ service level agreements (SLAs) are fed into the XOPS platform, so performance can be measured against those as and when required by an airport operator.
Airport operators can use XOPS to determine how or where GSE assets might be better utilised or, indeed, if all assets are actually needed: is there too much equipment in a fleet? All data can be accessed via any Android device, whether that be PC, laptop, tablet or even smart phone.

Wide-ranging customer base
An obvious potential customer for XOPS is the airport operator. For example, Hong Kong International Airport (HKIA) has used the system to good effect to pool its GSE fleet amongst the four major local handlers and to optimise performance of GSE assets at Terminal 2. Resonate MP4 won that tender in 2018.
Elsewhere, Airport Authority Hong Kong (AA) – which operates HKIA – and the airport’s four GSPs all use XOPS on an ongoing basis.
“AA wanted a robust control system” to manage its turnaround operations, says Read. Handlers Jardine Air Terminal Services (JATS), SATS, Hong Kong Airport Services (HAS) and Hong Kong Air Cargo Terminals Ltd (Hactl) share a fleet of more than 600 GSE units and XOPS – as well as its other benefits – allows AA to see which handler is using which units, 24/7, in real time. This enables it to bill the handlers according to their GSE usage, as well as to monitor performance and efficiency in GSE use.
Indeed, “GSE pooling doesn’t work without a system such as XOPS,” Read believes, while adding: “The example of HKIA really has shown that pooling does have value” when monitored and supervised by an operational management platform like XOPS.
As well as airport operators, other users of the system include airlines, such as the previously mentioned Air France and Ireland’s Ryanair, which uses the XOPS FMS capability at more than 30 airports across the UK (including its London Stansted hub), Spain and Poland. Plus, the Saudi Airlines Group chose XOPS for its GSE maintenance joint venture covering more than 20 airports in Saudi Arabia.
Gate Gourmet, the caterer, also uses XOPS, in its case across US and European stations to track its catering truck fleet and optimise its operations.
Self-handling airlines are another potential customer base, while some collaboration has also been undertaken by Resonate with Amazon Prime. In essence, while some smaller enterprises have employed XOPS, it is those that operate in the larger, more complex airside environments that are likely to benefit most from the system, Read considers.
Also likely to benefit greatly are those gateways and GSE operators considering evolving the dynamics of their airside procedures in order to gain efficiencies or, perhaps, to become more environmentally friendly, such that turnaround standard operating procedures and/or GSE fleets are likely to change. Those that are looking to digitise to optimise performance might also well consider the XOPS capability, he stresses.
Upon a client deciding to go with XOPS, it will work with Resonate to jointly programme the software with all the information necessary for the system to deliver its full functionality of monitoring and oversight capability, scheduling and so on.
And the XOPS team provides ongoing support to the customer as its operational procedures and requirements change, with a specific focus today on evolving XOPS to offer new features and functionalities, including integrated video, artificial intelligence (AI) analysis tools and support for driverless vehicles and dark ramps, Read concludes.