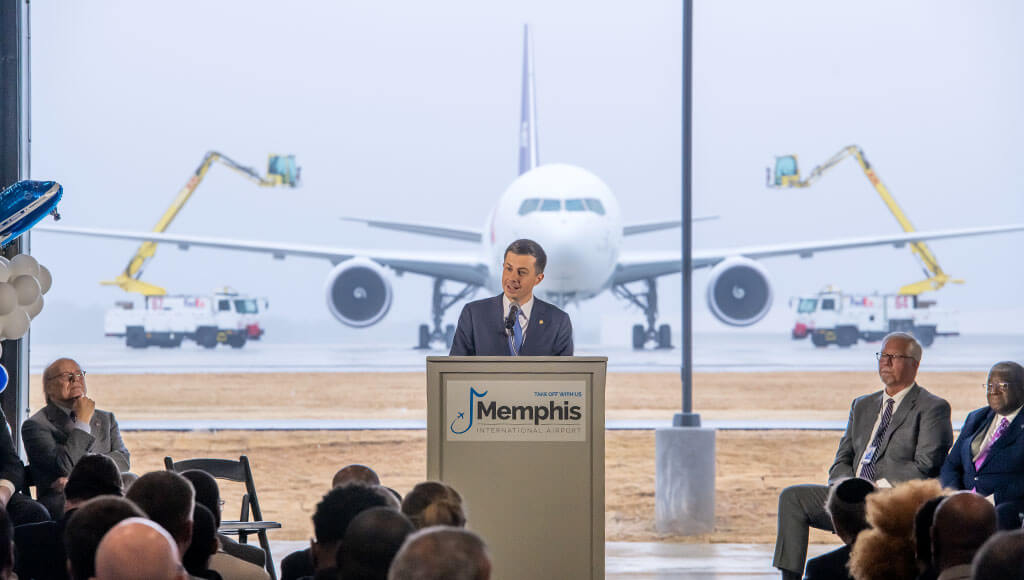 Dignitaries and leaders from Memphis and Washington, D.C. joined the Memphis-Shelby County Airport Authority in celebrating the facility, which was completed just in time for the heavy holiday cargo season.

“This holiday season and every season, it’s critical that American families and businesses get the goods they need when they need them,” said U.S. Transportation Secretary Pete Buttigieg.

“Memphis International Airport is the biggest cargo airport in the country, and this innovative aircraft de-icing facility is one of the many ways we’re modernizing America’s supply chains.”

The facility is one of the largest of its kind in the world. It provides a centralized location for passenger and cargo airlines to perform deicing operations immediately prior to takeoff, which will streamline airline operations and lessen the chances of cancellations and delays.

“Innovative projects like this are key to improving safety, increasing efficiency and advancing sustainability across the country,” said Deputy FAA Administrator A. Bradley Mims.

There are 12 deicing pads at the facility capable of serving both large and smaller aircraft. Ground traffic at the CDF is coordinated from the new 1600-square-foot control tower, and pilots are aided by electronic message boards at each bay and at queuing locations.

“We want to thank the U.S. Dept. of Transportation, Federal Aviation Administration and Memphis International Airport for their support of this new Consolidated De-icing Facility – an example of how to deploy technology to improve operational efficiency,” said Richard W. Smith, president and CEO, FedEx Express.

“The timing could not be better as FedEx enters the busy holiday season.

“This facility is a shining example of how we can help ensure our team members are safely operating throughout the winter season as we deliver outstanding service for our customers.”

This is the culmination of approximately 10 years of planning, stress, resilience, partnership, and collaboration,” said Scott Brockman, MSCAA President and CEO.

“The CDF will improve operations for both passenger and cargo carriers and will provide the new standard in winter operations and aircraft deicing management.”