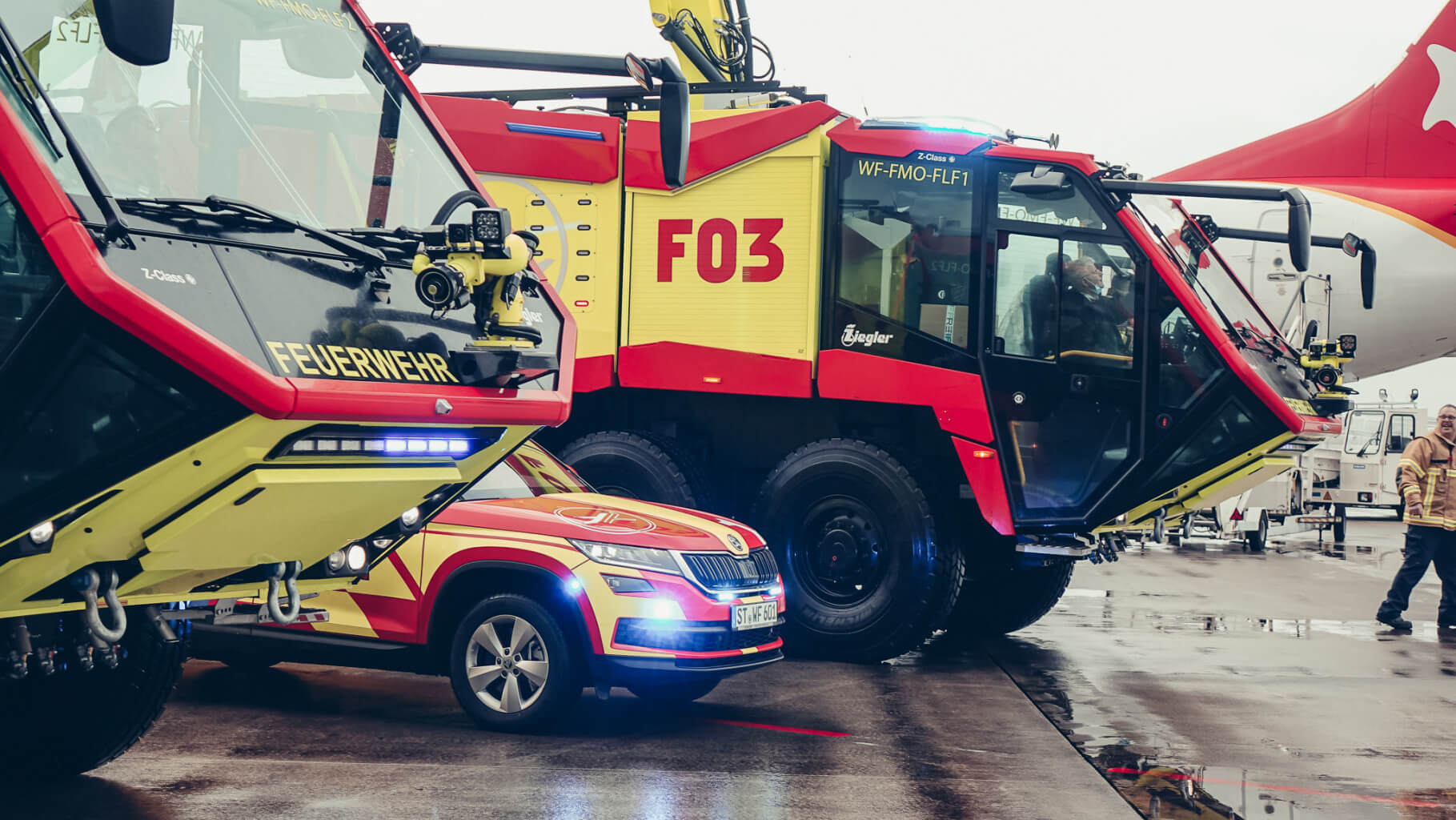 FMO is the first airport worldwide that received a Z8 of the latest generation of the new ZIEGLER flagship.

In the year 2020, ZIEGLER Group presented the first Z6 of the new Z-Class.

This vehicle shows unprecedented acceleration values, the most powerful drive motor on the market, an extremely spacious cabin (Z-Cab AiR) and much more.

The new Z-Control and the new ZIEGLER turrets are also part of the equipment.

With an experience of more than 50 years in producing airport rescue and fire fighting vehicles, ZIEGLER created a new standard with the roll out of the new Z-Class last year.

Both of the new Z8, which have been developed for the airport Münster Osnabrück, impress with their enormous performance which brings the tremendous extinguishing volume of 14,000 l each to the place of action quickly in a case of emergency.

The impressive acceleration (from 0 to 80 km/h in < 18 s, Vmax 140 km/h) due to the two Scania DC 16 386 motors with 770 HP each, and also the excellent handling are responsible for the vehicles being able to drive safely on the asphaltic roads -but also aside them –and to get to the place of action in a short time.

TITAN Spezial fahrzeugbau GmbH is one of the leading manufacturers for ARFF chassis and has successfully completed numerous customer projects in the long-standing partnership with ZIEGLER Group.

With many years of experience, the close exchange with the ZIEGLER Group, the joint customer contact as well as the integration of latest driving technologies, TITAN has contributed it part to raise the performance of the Z-Class to the next level.

The development of the new Z-Class was fundamentally rethought –the approach was a consistent, comprehensive platform strategy.

This development also resulted in a well thought-out, modular ARFF chassis series (4×4 –6×6 –8×8) which more than fulfills all international requirements, sets new standards and at the same time allows optional chassis accessories according to customer requirements. 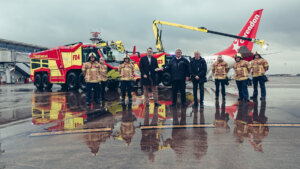 Robust drive and braking system for reliable performance in any situation

The 3,000 Nm of input torque from each of the ZF transmissions catapult the 48-ton fire truck to top speed without any interruption in the tractive force.

The extremely spacious cabin “Z-Cab AiR” has been developed further.

It offers a height of 1,80m for the passengers to stand comfortably, as well as the best panorama view due to high level of glazing.

Additionally, both vehicles are equipped with a panoramic camera system “BirdView”, a light mast with LED spotlights and a front side rapid intervention unit.

“We are very pleased to be the first airport that puts a Z8 of the latest generation into operational service,” says Olaf Pohlmann, head of the airport fire department at Münster/Osnabrück Airport.

“The two vehicles are an extreme great addition to our fleet and are an important element in ensuring that we can continue to guarantee safety at our airport in the future through the latest technology.” 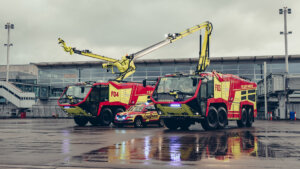