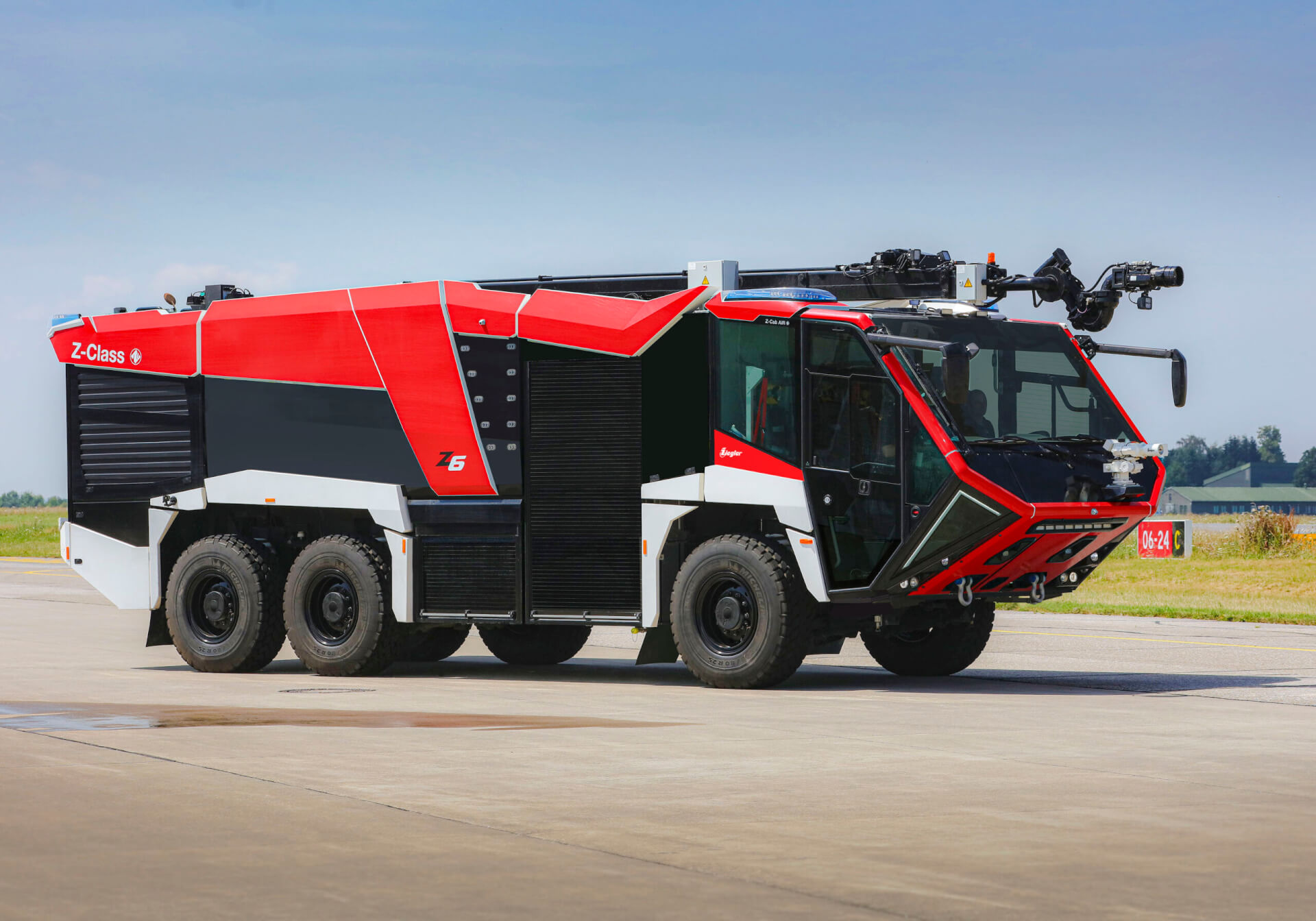 ZIEGLER enters the highlight of the Innovation Rollout 2020 with the presentation of the new Z-Class.

The moment everyone has been waiting for has finally arrived: ZIEGLER presents the new royal class of airport firefighting vehicles and thus enters a new era.

The new Z-Class shows unprecedented acceleration values, the most powerful drive motor on the market, an extremely spacious cabin (Z-Cab AiR) and much more.

Of course the new Z-Control and the new ZIEGLER turrets are also part of the equipment.

ZIEGLER’s first airport firefighting vehicle was the FLF 30/50-5 for Kopenhagen airport. It was delivered in 1969.

ZIEGLER relies on cooperation with experienced manufacturers of vehicle chassis.

Thereby, every partner can concentrate on his core competencies which leads to optimal values regarding driving performance and extinguishing technology of the Z-Class.

The modular design ensures the weight distribution when considering the optimal arrangement of each component.

In addition, the large cabin of the Z-Class (Z-Cab AiR) provides comfort and is very spacious with 1,80 m standing height.

How has the new Z-Class been developed?

In different phases of the development project – or rather innovation project – various workshops were held, both internally and externally with different partners.

The development process was accompanied by constant calculations and internal and external test procedures.

Among other things, virtual simulations that correspond to the latest state of the art were used for this.

Topics such as dynamics, acceleration and driving security were top priorities in the development of the new Z-Class.

It was also important to find a low center of gravity for the new Z-Class. Another key point was the development of the Z-Cab AiR. Comfort, security and clarity played an important role here.

Of course, all the proven components of ZIEGLER’s extinguishing technology had to be installed in the new Z-Class as well.

ZIEGLER also relies on the consistent use of Z-Vision in the new Z-Class. In order to obtain realistic results, a prototype of the Z6 was and is subjected to various physical tests.

The vehicle is tested on its performance and has to be put to the test on various testing grounds.

Thus, not only the material properties, stability and durability, but also possible vehicle configuration and its structure were inspected.

Since the new Z-Class is compatible with both Z-Control and the new ZIEGLER turrets, these ZIEGLER core competences were also put through their paces in the tests.

In addition to fulfilling customer requirements, ZIEGLER’s priority is not only to meet current national and international standards, but to exceed them.

For users and customers, this means that ZIEGLER offers a tested and certified airport firefighting vehicle that has passed all practical tests with flying colors.

Top 10 reasons for the new Z-Class